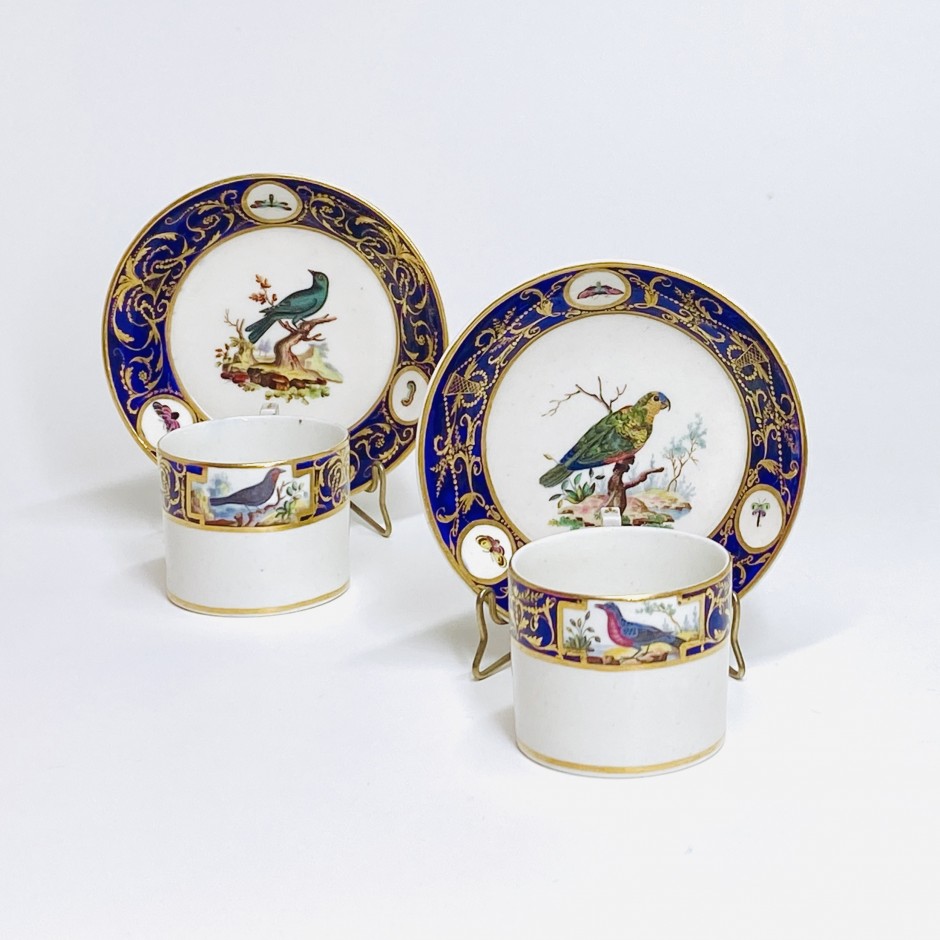 Two small litron cups and their saucers in soft Tournai porcelain from the service of the Duke of Orléans, decorated with birds

Based on Buffon's "The Natural History of Birds". The first of these two cups is decorated with the "Blue-breasted Manakin

purple” and on the saucer the “Varied Amazon Parrot from Brazil” The second cup is decorated with “The black father, the

Martinique” and its “Philippine Jackdaw” saucer on a blue background decorated with gilt scrollwork, arabesques and garlands

of pearls and butterflies in medallions. They are equipped with a rectangular handle called "Greek style" The names of the birds

are written in black on the reverse. (see photos)

Prices and additional information on request.

This service ordered in 1787 by the Duke of Orléans, cousin of Louis XVI, at the Tournai factory included nearly 1600 pieces. The decorations, inspired by those of the Sèvres factory, are made of birds faithfully copied from Buffon's works on ornithology and placed in the center of the room inserted in the neo-classical border. They testify to the taste of the time for the exact sciences.

The Duke of Orléans (1747-1793), cousin of Louis XVI liked to receive at his home, for "big suppers", after performances at the opera. He ordered for his residence at the Palais Royal in Paris, a porcelain service from the imperial and royal factory of Tournai which was never honored because the revolution was doing its work in the meantime. The reason why the Duke of Orléans turned to the Tournai factory rather than the Sèvres factory was probably due to the lower price of Tournai porcelain. The service of the Duke of Orleans included the considerable number of 1,593 pieces. In comparison, the Sèvres service with the largest number of pieces is the one delivered to Catherine II of Russia and it was composed of 706 elements. Louis XVI's mythological service had 493 pieces. The only more important service in European porcelain is the swan service of Count Brühl made in Meissen between 1737 and 1741 (2,200 pieces)

The "Birds of Buffon" service testifies to the 18th century taste for natural sciences and curiosities. Its decorations are organized around representations of birds directly borrowed from the Natural History of the naturalist Buffon (1707-1788), published between 1770 and 1786, and whose color plates devoted to birds were produced by François- Nicolas Martinet (1731-1800). The decorations are placed in the center of the room or in a cartridge inserted in the neo-classical border, provided with sequins and small insects.

After the Revolution the service was dispersed, a large part of the service of the Duke of Orleans (594 pieces) was purchased in 1803 and 1806 by the Prince of Wales through the merchant Robert Fogg. Today 565 porcelains from the service are still kept in the English royal collections at Windsor Castle, the 29 missing pieces having probably been offered by the British Crown. Source: Proantic article of March 25, 2018 "The service said to the birds of Buffon du Duc d'Orléans"